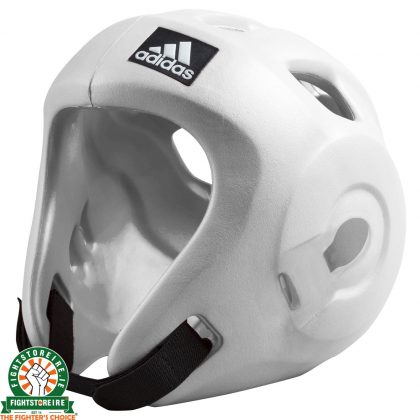 Also available in black, red and blue. Check out our full range of headguards.

Adidas was founded in 1948 and registered as a company on the 18th August 1949 by Adi Dassler. It has grown to be the second biggest sportswear manufacturer in the world after Nike. In the 2008 Bejing Olympic Games, Adidas was the official, approved supplier of boxing gloves and headguards which were all their AIBA range as well as stocking out the GB team with Adidas shorts, vests and boxing boots. Adidas continue to grow and create great products that aren’t only supplying boxers but athletes in a vary of different sports all around the world.

What do you think of the red Adidas Adizero Speed Head Guard?

The online store is being re designed and some options may not work correctly. If you experience any issues, please contact us. Apologies for any hassle this may cause. Dismiss