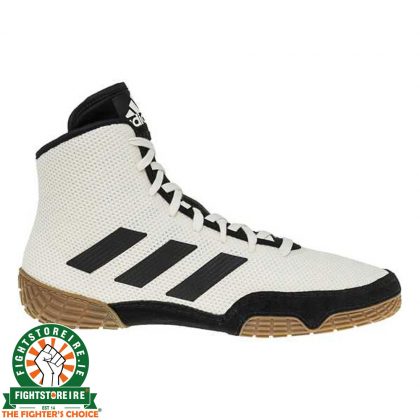 Originally debuting for the 2016 Olympics in Rio, the first Adidas Tech Fall was one of the most innovative wrestling shoes ever at the time. Made to be extremely light and have extreme traction it was a shoe made too early for its time, and the price point reflected that.

Now, a little over four years later, Adidas has re-opened the Pandora’s box of the Tech Fall line and has worked their magic to create an even more innovative product at an attainable price point. The Tech Fall 2.0 is the perfect all-around shoe that is great for a beginner and the well-seasoned athlete. Built with a reinforced upper from the inside out, the Tech Fall 2.0 is built with great amounts of flexibility, support, and grip that any champion athlete could ever need.

Modeled after the famous Kendall Cross Adistars, named for the 1996 Olympic gold medalist, the Adistar was one of the hottest shoes of the late 90’s and early 2000’s. The era of scrunchies, windbreakers, spikey hair, and NSYNC to put in perspective how long ago THAT was. Built with modern materials the Tech Fall 2.0 builds upon the slightly outdated infamy of the Adistars. The Tech Fall 2.0 was inspired by this classic but has modern twists that allow it to perform at a high level.

The Adidas Tech Fall 2.0 pairs a tall boot-style cut with highly breathable mesh material that allows for the shoe to be both extremely breathable and lightweight. Considering that a tech fall in folkstyle wrestling is 15 unanswered points, a wrestler has to move pretty quick to achieve it.

The knitted upper on the Tech Fall allows your feet to feel dry and weightless allowing you to start off the match on the right foot. Coming with increased lateral support, stability, and strength, you can be rest assured that the Adidas Tech Fall 2.0 will never crack under pressure. Supporting the underbelly of the shoe is a suede midsole coming in multiple colorways that doubles for increased individuality and strength to decreased wear and tear. The rubber-gum sole has traction areas that run up the sides of the toe, heel and mid-foot area.

The superb traction paired with lightweight build will have your feet stuck to the mat like fly paper in every position allowing for maximum drive and power.

Whether powering through a shot or in a sticky scramble the Tech Fall won’t fail. Closing off the Tech Fall 2.0 is a wrapping tongue that allows for superb sock-like comfort and a secure lacing garage to keep your laces strapped down in the heat of battle. Coming in a size run from a 6.5, to a size 16, the Tech Fall 2.0 is the perfect grappling shoe for any athlete looking to up their game. The first-class build with modern materials, paired with the classic silhouette, allows the Tech Fall 2.0 to be the shoe of future Mat Wizards and wrestling All Stars.

What do you think of the blue and white Adidas Tech Fall 2.0 Wrestling Boots?